I’ve been away from posting due to several hectic weeks — my guitar students were preparing for concerts, my son was catching up on his overdue 11th grade projects (with my assistance), I was recreating all of my computer files (after an actual Samsung tech directed me to REFRESH my Windows 8 laptop) and carrying on with the usual ‘front office’ business. Most evenings I have been so fatigued by 10pm that I’m just not focused to write, converse or even play properly. So much for excuses — it’s time to get back to it!

With concerts and end-of-term advice in full force, I’ve been fielding questions about producing sound on the guitar. This is not the nuts-and-bolts of amplifiers and cables and pickups, but the physical creation of sound using one’s fingers/hands/pick. 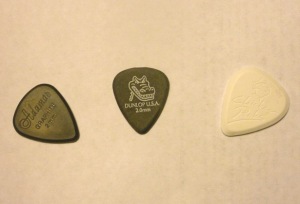 The three main types of picks I prefer.

I’ll fast-forward to ‘modern times’ and bypass all the sordid details of trying a broad range of picks over the years (including the Original Min’d Pick made of ridiculously heavy agate and metal fingerpicks). Several years ago I happened upon Dunlop‘s line of flatpicks which include the Tortex and Gator Grip lines. Both are similar in feel, but the Gator Grip come in thicknesses to 2.0mm. To their credit, Dunlop produced 2.omm picks in several materials — the Gator Grips won me over because they produce very minimal pick noise on the strings. The 2.0mm thickness became my standard. Truth be told, I do check out other design, though they must be similar in thickness to my trusty Gator Grip 2.0.

In fact, the folks at Dunlop resurrected a pick that had a bit of mystique to it from its association with Jerry Garcia — the Adamas graphite pick. At one point someone on Ebay had a half-dozen selling for $40! Luckily, Dunlop brought these carbon-graphite 2.0mm picks to the mass populace at a reasonable. They are very stiff and may outlast me, and they really have less friction against the strings. Another rather recent entry to the upper-end pick market is Chicken Picks — not just for country players, they are made in the Netherlands and come in both 2.2mm and 2.6mm. They are the slightest bit oversized with a nice bevel all around. I received one of each thickness just last week and find them very comfortable.

(Each pick is pictured in the photo above.)

I did check out a Wegen gypsy jazz pick (courtesy of Lulo Reinhardt) which comes in at 5mm — I’d need to work with this for a while as it is very thick. But it felt and sounded good for the few minutes I had it. I’ve also used the marvelous John Pearse sarod picks, made from both buffalo horn and rosewood, as well as the Surf Pick, made from very dense hardwood. Then I have the Lexan (plexiglass) picks that were custom-made for me…. a different animal altogether.

Before I get really carried away and recount all of the picks I’ve ever used, I’ll stop here and go use a pick with the guitar (aka Practice).